About 165 turn out for special town hall

The recently passed climate change, tax and health care bill, gun reform, national security and the need for respect in politics were among several topics discussed during an Aug. 22 town hall with …

About 165 turn out for special town hall

We just got to lower the temperature of the room and find a way to figure this out together, be collaborative and build a better society — build a better country.”
Congressman Jason Crow
Recognizing local leadership

Sharma created the app “MedConnect,” which he said he created in 2020 and continues to work on.

“Basically, what MedConnect does is that it allows patients from various medical conditions to connect with other patients and get support for their conditions,” Sharma said.

He said the app currently supports more than 400 medical conditions, and patients can get answers to questions specific to them, explaining that the app provides filters based on race, gender, ethnicity and where the user is from.

“I really want to create a platform where people can get support with their struggling medical conditions and feel like they’re part of a community,” Sharma said.

The recently passed climate change, tax and health care bill, gun reform, national security and the need for respect in politics were among the topics discussed during an Aug. 22 town hall with Rep. Jason Crow, a Democrat in Colorado’s 6th Congressional District.

Crow spoke to about 165 people at Koelbel Library in Centennial. It provided an opportunity for him to hear resident feedback before he heads back to Washington D.C. for the final legislative push, he said.

“I love these very much. I get as much out of these as I hope you’re gonna get out of it today,” Crow said. “But I’m really excited for this one in particular because this has been a slog of a Congress, there’s no doubt about it. I kind of call this the ‘Frankenstein Congress’ because when things don’t seem like they’re alive, then they’re alive.”

A recent example was the PACT Act. In July, the bill, which expands health care and benefits for veterans exposed to burn pits and other toxic substances, gained national attention when 25 senators blocked it on the day it was expected to pass the Senate.

The bill had previously passed the Senate in June by an 84-14 vote, but a technical error in the bill required another vote, according to an NPR article. The July vote ended up being 55-42, with 25 Republican senators who previously supported the bill voting against it. However, on Aug. 2, the Senate voted again, and this time passed the bill in a 86-11 vote.

“We cannot overstate how important this is for my fellow veterans and brothers and sisters, of how big of a difference it’s gonna make,” Crow said.

One piece of legislation Crow highlighted during the town hall was the health care, tax and climate change bill, which Democrats have named the “Inflation Reduction Act.”

Crow was among the supporters of the bill, which aims to lower health care costs, promote clean energy and increase the taxes on some corporations, according to the White House’s website.

“This is really a transformative piece of legislation,” Crow said.

He said the bill will reduce the federal budget deficit by an estimated $300 billion and taxes will not be raised on families earning less than $400,000 a year.

“We are going to make our largest, most profitable corporations pay their fair share,” Crow said.

The legislation sets a 15% minimum tax rate for companies with profits of $1 billion dollars or more, Crow said, explaining this will apply to about 150 corporations.

The legislation also includes giving $80 billion to the Internal Revenue Service, otherwise known as the IRS, which raised some conspiracy theories about a “shadow army” that could “shake down small businesses with assault rifles,” according to The New York Times.

Reuters Fact Check looked into the issue and reported social media users raising these concerns “miss key context,” including that the budget is for an array of positions, not just auditors, and representatives have repeatedly said “audit scrutiny would not increase relative to recent years for those making less than $400,000.”

When asked about the concerns, Crow said the Inflation Reduction Act is a great bill and sometimes when people are up against a good bill, they resort to fear mongering.

Crow said in recent years, audits for millionaires have decreased more than 70% and basic services for residents trying to get their tax returns have gone down. Last year, four out of five customer service calls for the IRS went unanswered, he said.

The bill will help increase enforcement to find those who are not paying their taxes and increase services so people can get responses from the IRS, he said.

Crow said the legislation will also reduce the cost of healthcare. For example, the bill will extend enhanced Affordable Care Act subsidies for another three years and will allow Medicare to negotiate prices for some drugs, he said. It also caps Medicare Part D out-of-pocket drug costs at $2,000 a year for seniors and individuals with disabilities on Medicare, starting in 2025.

“It’s going to make investments in clean energy, so we can actually address the climate crisis,” Crow said.

He said the bill will help promote Colorado’s economy because clean energy is one of the fastest growing sectors of the state’s economy and employs thousands of Coloradans. 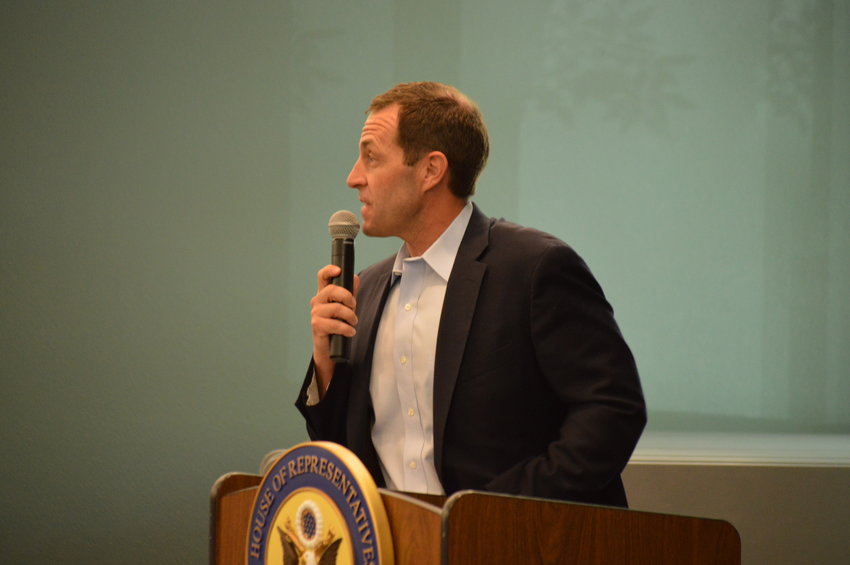 Jason Crow speaking at a town hall event at Koelbel Library in Centennial on Aug. 22, 2022. 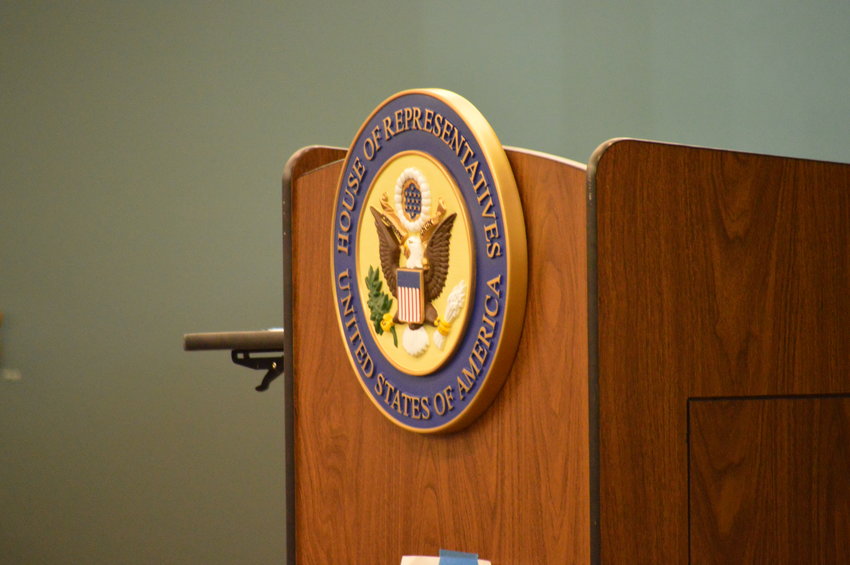 Podium at Jason Crow’s town hall event at Koelbel Library in Centennial on Aug. 22, 2022.
Previous Next

Crow, who assumed office in 2019 and is running for re-election in November against -Steve Monahan, said he currently serves on three committees in Congress — the House Small Business Committee, the House Armed Services Committee and the House Permanent Select Committee on Intelligence.

“My committees are really a reflection of my priorities in Congress and the things that are important to this community,” Crow said. “My adult life has been dedicated to preserving the national security of our country. And I started my public service career in uniform and served three combat tours in Iraq and Afghanistan.”

After being asked about U.S. involvement in Ukraine, Crow said the issue is something he spends a lot of time working on in the intelligence committee and the armed services committee.

“I believe in supporting Ukraine and making sure that they’re in a position to win and defend their homes and their democracy,” Crow said. “But we cannot allow this to disrupt the international economy.”

Crow said he has visited Ukraine twice in the last year, and the things the Russian military is doing are horrific and has to stop. However, he said he believes firmly against perpetual war and does not think the U.S. should fight the war nor put a no fly zone in place.

“It has gone, like so many great ideas, to die in the Senate. That’s not for lack of support by our great senators here in Colorado, but that’s a simple function of the filibuster, where you need 60 senators to agree to any one measure,” he said.

Crow, who voted to help pass the Bipartisan Safer Communities Act, which was the first major federal gun safety legislation passed in about 30 years, said he has had a lifelong relationship with firearms. He said he was given his first gun when he was 12 years old and has been a gun-owner for decades.

While Crow was speaking, one attendee interjected and asked, “Can we take them from you?”

“OK, well, we’ll get to your question,” Crow responded, as others in the crowd laughed.

Crow continued describing his experience with guns, saying he grew up hunting and then became an Army Ranger.

“I used weapons of war at war, and I had them used against me. And I know what that looks like,” said Crow.

“And the reason is because the weapon matters. They’re designed to do very, very different things, and they’re both very good at what they’re designed to do,” he said. “Those weapons of war — and they are, they were designed by and for the Department of Defense to go to war — don’t belong on our streets.”

Many in the crowd applauded and cheered in response, while a few others booed. 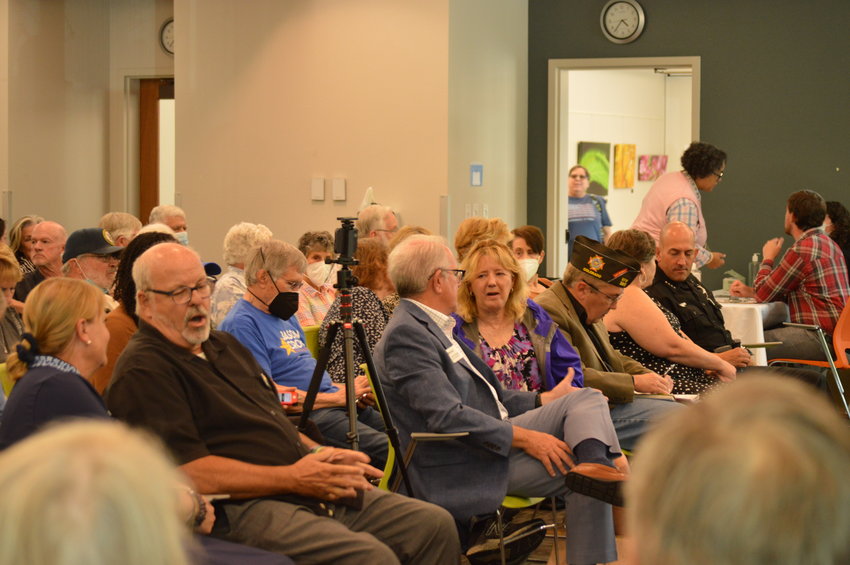 Bipartisanship and need for respect

Being bipartisan is something Crow takes seriously, he said. He noted a report by the Lugar Center and the McCourt School of Public Policy at Georgetown University listed him as number 11 on the bipartisan index rankings for 2021 for the U.S. House of Representatives.

According to Georgetown University’s website, the bipartisan index “measures how often a member of Congress introduces bills that attract co-sponsors from the other party, and how often they in turn co-sponsor a bill introduced from across the aisle.”

Bipartisanship is the way to get legislation done, Crow said, emphasizing the importance of respect in politics.

“The problems facing our country are complicated. Governing is hard. Legislating is hard. There are unintended consequences of legislation all the time,” he said. “But what that means is, we have to find ways to respect each other.”

Crow said it’s important to be open and to engage with others, as well as recognize that words matter. The rhetoric of elected officials and leaders can incite violence, and he said he has been vocal against some of his colleagues and calls out when such rhetoric is used.

“There is extremism increasing in our nation. Threats against me, threats against my colleagues,” Crow said. “You all should not tolerate elected officials at any level engaging in that irresponsible rhetoric.”

“We just got to lower the temperature of the room and find a way to figure this out together, be collaborative and build a better society — build a better country,” he continued. “I’ll continue to show up, answer your questions, and let’s do this together.”

Colorado’s Prop 123 affordable housing initiative could face rocky future
Voters in November also sought to reduce their taxes and, taken together, the changes could lead to difficult decisions down the road.

Consumers encouraged to keep some holiday spending local
Reality is simple: Local businesses are at a disadvantage when competing with the price and convenience of Amazon and online shopping offered through the big-box stores such as Walmart and …

Teachers protest order to reorganize Adams 14 district
The next installment of the dispute between the Adams 14 School District and the Colorado board of education was in the form of a Nov. 19 rally outside Adams City High School. About 30 teachers …