Exhibit is a collaboration between a local artist, Museo de las Americas and Arapahoe Libraries

A bright smile spread across Michelle Ollerton’s face as she watched her 2-year-old son, Isaac, point to the colorful piñatas hanging above them in the cafe of Smoky Hill Library, trying …

Exhibit is a collaboration between a local artist, Museo de las Americas and Arapahoe Libraries

A bright smile spread across Michelle Ollerton’s face as she watched her 2-year-old son, Isaac, point to the colorful piñatas hanging above them in the cafe of Smoky Hill Library, trying to choose which one was his favorite.

Would it be the piñata of “El Trompo,” a spinning top that is a popular traditional toy in Mexico? Or what about “La rosa,” the rose, or the monarch butterfly, which was his mom’s favorite? With about 30 options to choose from, it’s a tough choice.

The piñatas are part of a new exhibit, called Celebrating Mexico/Celebrando México, which debuted at Smoky Hill Library on Sept. 14 and will be open through Nov. 9.

About 40 people gathered to celebrate the opening of the exhibit, which was developed through a partnership between Arapahoe County libraries, Museo de las Americas and a local artist, Maribel Arredondo.

Arredondo said she will never forget the smiling faces she saw in the audience when she was introduced as the artist behind the exhibit. It almost made her cry to think of it.

“I’m really, really happy,” she said about the experience. “It has a lot of meaning.”

Each piñata Arredondo created represents a part of Mexican culture. There are signs placed in the cafe that have QR codes linking to an informational page, in English and Spanish, that further describes the piñatas and their cultural significance.

“I think there’s a lot to learn. Each piñata tells a story, and I think those stories is where culture lies and where history lies,” said Anne Marie Boger, a community engagement coordinator at Arapahoe Libraries. “It’s a chance to learn and to relive and to celebrate.” 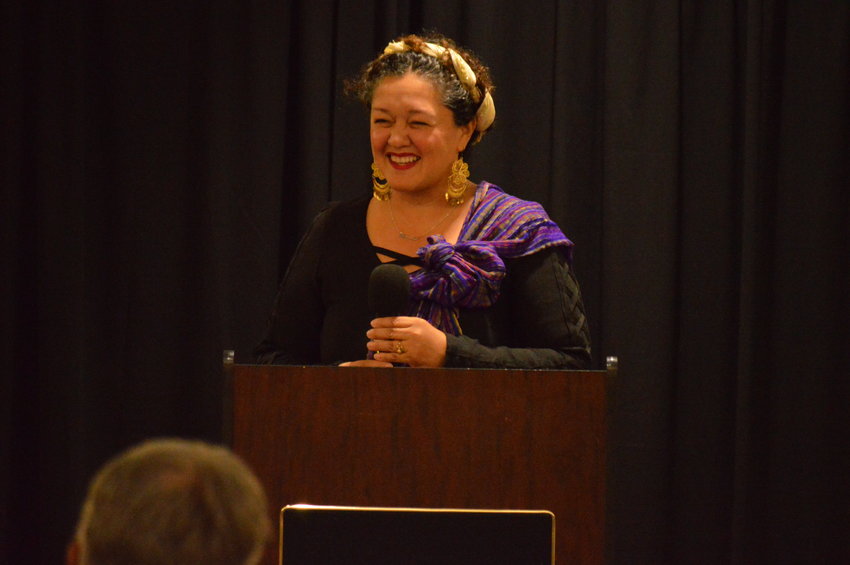 Maribel Arredondo spoke to a crowd of about 40 people on Sept. 14 at Smoky Hill Library. 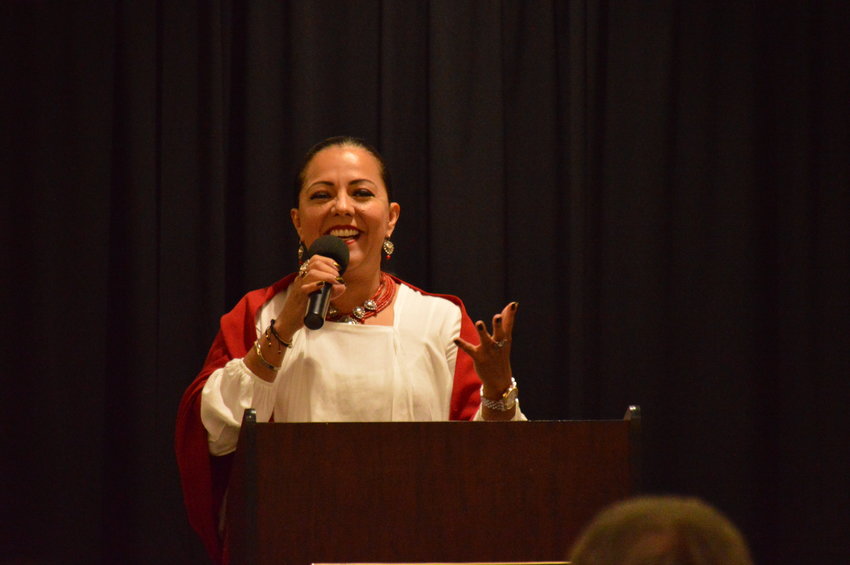 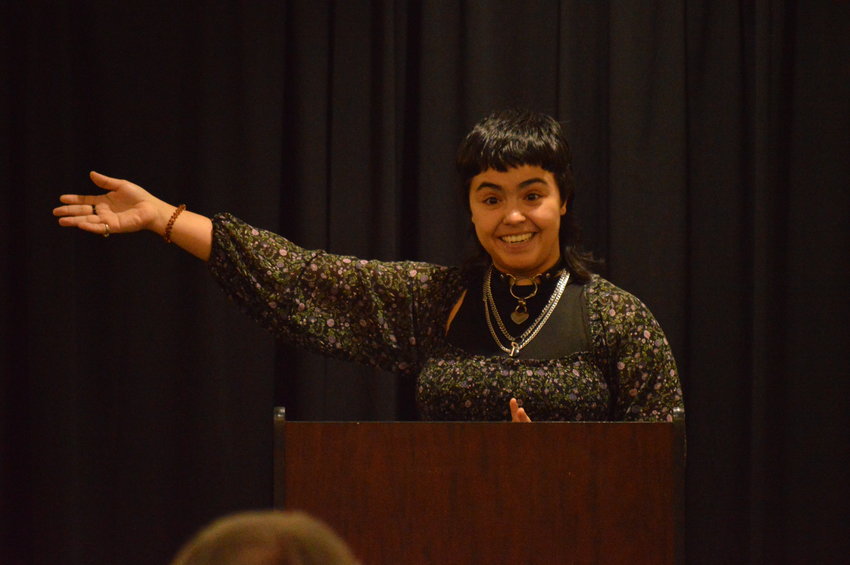 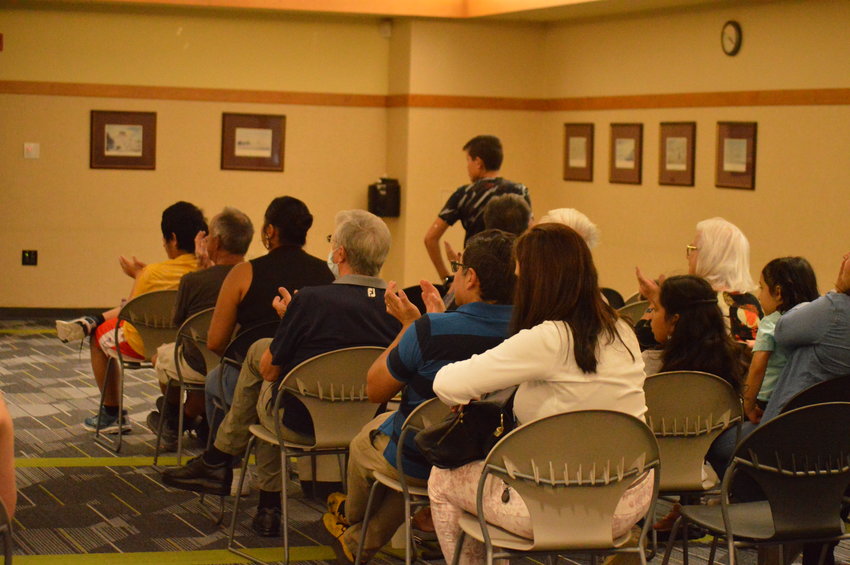 About 40 people gathered to celebrate the opening of the exhibit at Smoky Hill Library on Sept. 14.
Previous Next

The history of piñatas

The piñata is a true icon of the Mexican identity, said Val Ponce, the membership and engagement manager at Museo de las Americas, a nonprofit Latin American art museum.

“Mexico is so focused around the idea of mestizaje — of the combination of cultures — and how a lot of the time, this combination brings very fruitful and very beautiful art, as well as different expressions of culture,” Ponce said. “I think that of all of the items that represent Mexican culture, piñata is a really great one because it represents the unions of cultures.”

Piñatas are believed to have two different origins, Ponce said, with one being from China.

“It is said that during the time that the traveler Marco Polo was in China, he witnessed the celebrations that they had for their new year,” Ponce said, explaining piñata-style figures were part of the celebration.

Marco Polo then brought them to Italy, where they got the name piñatas, Ponce said. After that, the piñatas spread to Spain and then to Mexico.

“It was around the 16th century in which we started seeing the representations that we see today,” Ponce said, noting that piñatas were first made out of clay and then later made out of paper.

“However, recently it has been suggested that also with our indigenous origins, we were already celebrating with piñatas,” Ponce said, explaining some indigenous peoples may have used clay containers in a similar way for certain celebrations.

Arredondo’s favorite piñata in the exhibit is named “La alegría de la piñata” — which translates to “the joy of the piñata.” It’s her favorite because it is representative of history, since it is shaped like a traditional Mexican piñata with seven spikes on it.

Arredondo said these traditional piñatas were often used during Christmas and Las Posadas, a religious, traditional celebration leading up to Christmas from Dec. 16-24.

A common question people ask Arredondo is if she gets sad when people break the piñata she’s created, she said.

“No, that is the point,” Arredondo said. “Piñata represents happiness and community.” 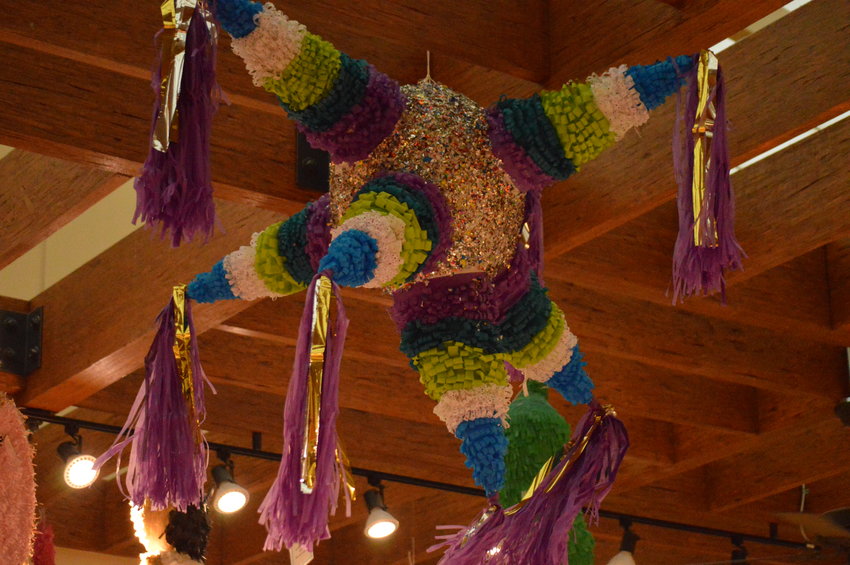 The piñata exhibit has been months in the making. Planning began earlier this year when Museo de las Americas approached Arapahoe Libraries about co-hosting a traveling exhibit, Boger said.

Hosting traveling exhibits is something Museo is dedicated to because it helps prevent artwork from being left on the museum’s shelves and unseen by community members, said Claudia Moran, the executive director at Museo de las Americas.

“What we’re trying to do with these traveling exhibitions is to take the pieces out to the community,” Moran said. “Those pieces are for you to enjoy, to learn (from).”

Deciding to collaborate with Museo was a no-brainer, Boger said.

“In light of the museum and the library celebrating Hispanic Heritage Month, it just felt like the perfect cohesion of goals and celebration,” Boger said.

Hispanic Heritage Month is observed in the U.S. from Sept. 15 through Oct. 15. Moran also pointed out Mexican Independence Day is Sept. 16.

While Museo de las Americas has had other traveling exhibits in the past, this one was different and really special because of the incorporation of a local artist who is part of the community, Moran said.

“She’s a wonderful artist,” Moran said about Arredondo. “She was all about having the exhibition and collaborating with Museo.”

“It just felt like, why not also celebrate a local Denver artist? And she was just the perfect third addition to the partnership,” Boger said. 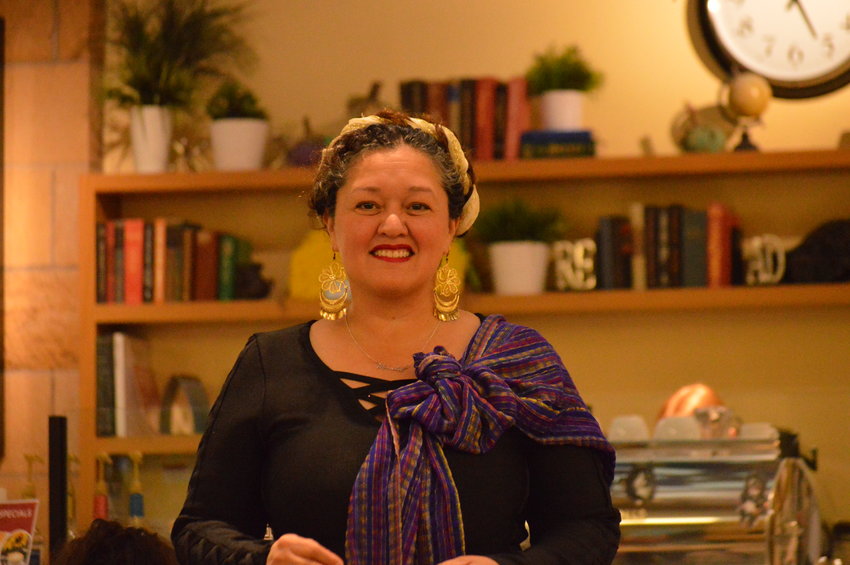 Although creating the piñatas took about three months, the idea of a piñata exhibit crossed Arredondo’s mind about three years ago, she said.

Creating a piñata can be a long process, but it’s also very fun, she said.

Always a crafty individual, Arredondo, who grew up in Mexico, began making piñatas as a child, she said.

Arredondo said she moved from Mexico to Colorado 12 years ago — the age of her first son. She now has three children.

She worked as a dentist in Mexico, she said, but about four years ago, she decided to create her own business, Curious Paper Art by Mamibel, which promotes Mexican art and offers cultural workshops.

“Mamibel” is her nickname, she said, and “curious paper” relates to her desire to connect with people of other cultures.

“I’m very proud to be Mexican,” she said, explaining she enjoys teaching others about Mexican culture.

For Arredondo, it’s especially important to share her heritage with her children. She compares herself to the father in the movie “My Big Fat Greek Wedding,” a character who often spoke about the importance of having pride in the family’s culture.

Most of all, she hopes visitors of the exhibit gain a memorable experience from it, whether it be learning something new or taking photos of themselves with the piñatas.

“My word only today is thank you, because for me, it’s a great opportunity,” Arredondo said. “I’m super excited.” 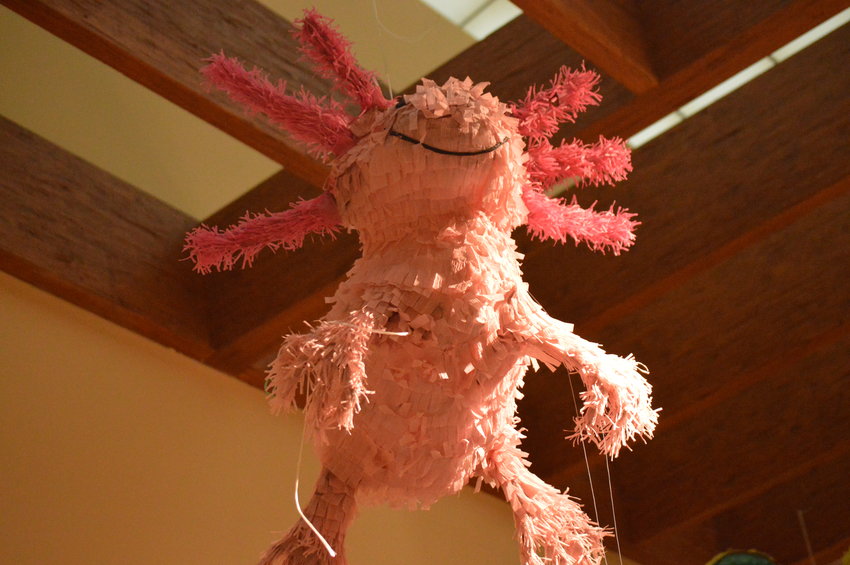 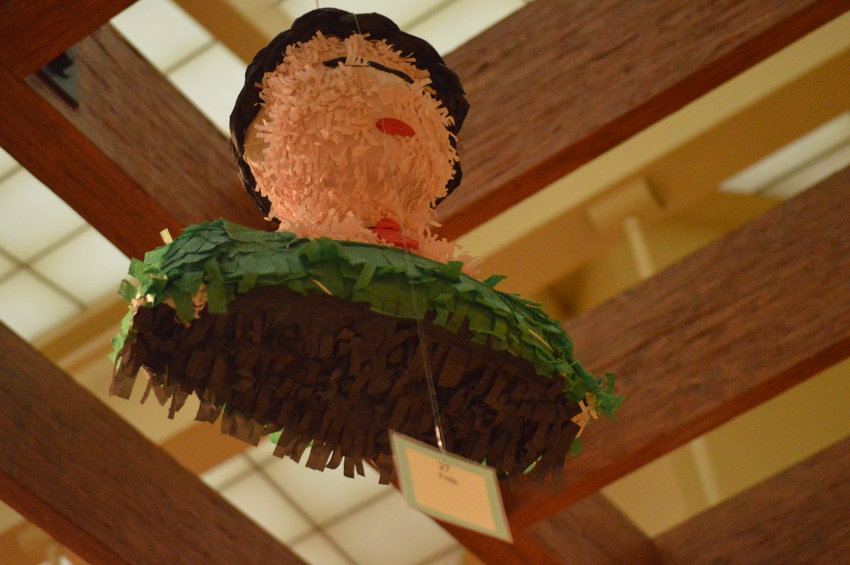 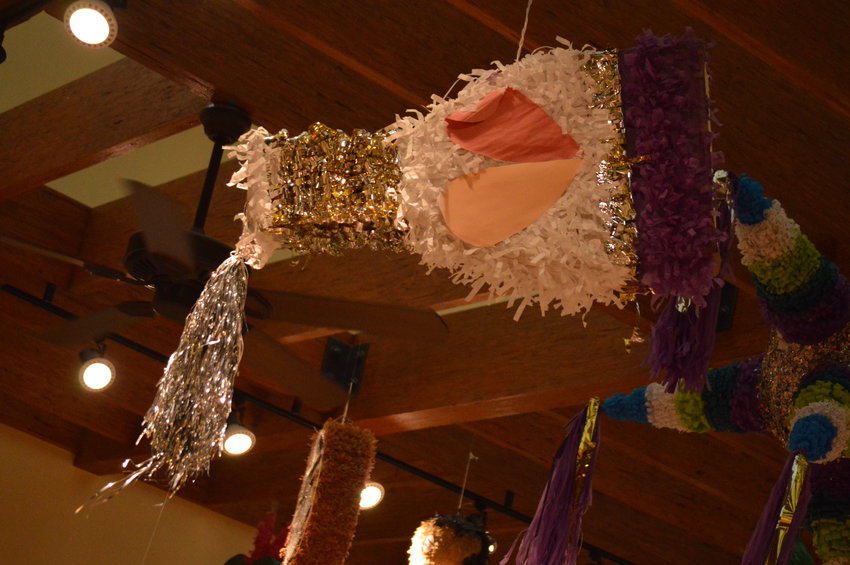 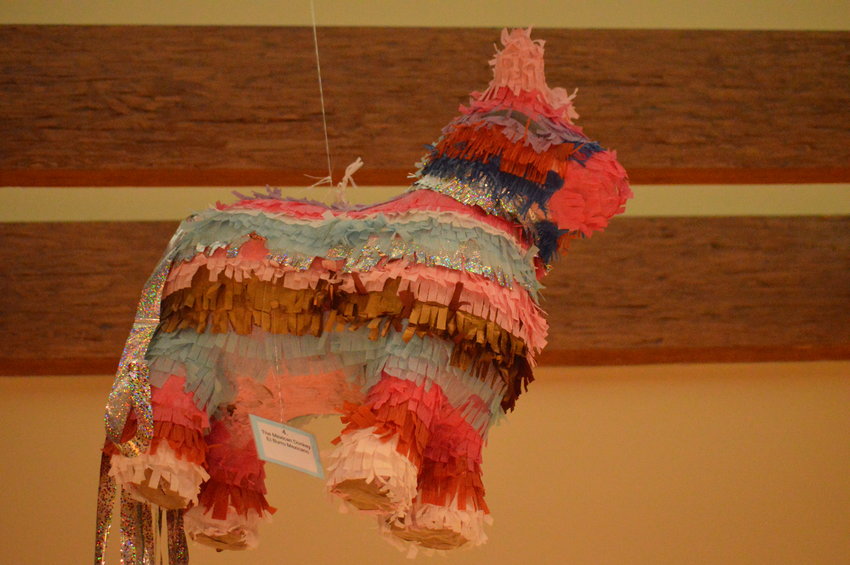 One of the piñatas on display in Smoky Hill Library on Sept. 14.
Previous Next

Boger said she could not have asked for a better turnout or crowd for the exhibit’s launch.

“It is just spectacular,” she said.

Ollerton, a Centennial resident, learned about the event while at the library, she said.

“I lived in Peru for a year-and-a-half, so I wanted to come see these awesome piñatas and celebrate,” Ollerton said, describing the piñatas as very well made, detailed and fun.

“I like that it includes a lot of people, like specifically celebrating one group but in a way that everyone can feel involved and important,” she said about the exhibit.

“We’re very happy to be here. I hope we can continue these trends (with) many other libraries,” Moran said.

Boger said Arapahoe Libraries looks forward to future traveling exhibits, and it is open to partnering with other cultural institutions in the region as well.

“I would invite all of you to go ahead and check out our piñata exhibit, and you’ll see that we are a combination of all kinds of different, beautiful cultures,” Ponce told the crowd of attendees. “And that is what we’re celebrating today.”

Those interested in learning more about the exhibit can visit: arap.li/3AeYXo9. To learn more about Arredondo’s business, visit: curiouspaperart.com.

Colorado’s Prop 123 affordable housing initiative could face rocky future
Voters in November also sought to reduce their taxes and, taken together, the changes could lead to difficult decisions down the road.

Consumers encouraged to keep some holiday spending local
Reality is simple: Local businesses are at a disadvantage when competing with the price and convenience of Amazon and online shopping offered through the big-box stores such as Walmart and …

Teachers protest order to reorganize Adams 14 district
The next installment of the dispute between the Adams 14 School District and the Colorado board of education was in the form of a Nov. 19 rally outside Adams City High School. About 30 teachers …